Saint Joseph’s Day, a Sicilian holiday, is March 19 and coincides this year with my Monday “Life Out of Tunes” radio show.  So I’m re-posting this article about my Grandfather Giuseppe, originally published more than two years ago.  I’ll take a few minutes on Monday’s show to feature Grandpa, his music and some Saint Joseph’s Day traditions…

Today, I received a pleasant surprise.  A year or so ago I was contacted by Professor James Leary from the University of Wisconsin.   Jim is a folklore historian who was researching material for a book about the ethnic folk music of Wisconsin.  We chatted about my Grandfather, who I wrote about here previously, and of his recording session in 1946 that was part of a federally-funded project begun in the 1930s to collect and preserve folk songs of native Americans and immigrants in their own languages.  (See my previous blog post: The Sicilian Wedding Singer.)  Our email exchanges also revealed that Jim and I had been classmates at Notre Dame.

About a month ago an envelope arrived from the office of professor Leary in which a letter was enclosed offering a discount on his newly published book and CD collection entitled Folk Songs from Another America: Field Recordings from the Upper Midwest, 1937-1946.  The mailing targeted descendants and family members who served as “research informants” for the individuals whose voices and stories appeared in the book.

I ordered a copy without hesitation and it arrived today.  Jim included a photo and a story about my Grandfather Accardi in his book.  Not only that, an accompanying CD contains a track of Grandpa Giuseppe singing one of the Italian songs he recorded, Tic-ti, Tic-ta.  The song’s lyrics, in Italian with English translation, along with its history are described also.

What an honor it is to know that my Grandfather’s songs and the folk songs of many other immigrants and native Americans, continue to be relevant decades later in Professor Leary’s “Dust-to-Digital” research and book.  Thanks, Jim! 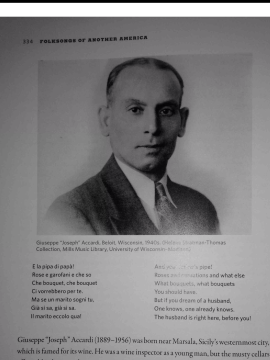