The party was at a classmate’s farmhouse on a Saturday evening in June.  We were invited to “entertain” our fellow sophomores as a band.  In fading daylight, the four of us set up our gear on the patio facing east into an apple orchard extending a hundred yards or more.  This was our big moment.  Not counting ourselves and the occasional younger sibling or stray parent, the O-Geez were playing for the first time in front of more people and trees than ever before.

Long shadows from the approaching sunset made setup a challenge.  None of us had thought about stage lighting.   We finished setting up in the glow of a single yellow patio light bulb until our host retrieved some trouble lights from the tractor shed and strung them around to serve as stage lights.  Our “gear” consisted of one Holiday-brand amplifier of mine and one enviously new Sears Silvertone that cousin Mike received in advance of his upcoming birthday.  Carl’s acoustic guitar required no amp.  Or so we thought.  Dan set up his snare drum and cymbal stage right.

Though we’d considered vocal amplification, not surprisingly we had no P.A. system.  We improvised, beginning with scrounging up two small, portable microphones that accompanied a couple of old tape recorders.  For mic stands, we used the extendable base sections of two wire music stands and taped the microphones to the angled stem at the top, sans the music holder piece normally found there.  We adjusted the height of the mics using the latch hook on each stand.

Fortunately, each of the amplifiers had two inputs, so we used one input for a guitar and the second one for a microphone.  To our great dismay the microphone cords were too short for setting the amps behind us in the customary rock ‘n’ roll band fashion.  Collectively we came up with the obvious and only solution.  Place the amps in front of the mic stands. 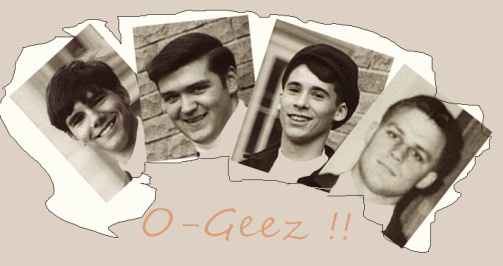 A ragtag bunch we were!  It was far from the ideal stage arrangement.  Dauntless, we wouldn’t let technicalities stand in the way of an auspicious first public performance.  Realizing that Carl’s acoustic guitar was no match for the electric noise blaring from our amps, we’d lowered one of the stands to position a microphone in front of his strings.  Three of us would share the one remaining mic.  Thankfully Dan the drummer didn’t sing.

Our set list of about ten songs represented quintessential three-chord rock ‘n’ roll, from Hanky Panky  to Twist and Shout.  I’m fairly certain we still didn’t nail every chord.  Lyrics were true to whatever we thought we’d heard on the record.  For some songs like Louie, Louie, mumbling was helpful.  Once the set was finished, we took a well-deserved break.  Then, we played and sang all of them one more time for our second set.

The show business bug had bitten us.  Most of us anyway.
“You know, guys, football practice starts in a few weeks,” Dan muttered as we were packing up our stuff.
“Huh?” was our only immediate response.
“I can’t be in the band and play football too.”
“What the hell?” I blurted, in utter disbelief that anyone would want to give up the glamorous lifestyle lying ahead for us.
“It’s okay.” mumbled Carl, the sole voice of reason. “We’ll find someone else.”

I slept restlessly that night, still scratching where the show business bug bit me.  Or was that a mosquito bite?  No matter.  One would go away.  The other one wouldn’t.