When I was a young boy, Walt Disney released a movie that made a lasting impression on me.  It turned out to be the source of a recurring nightmare for quite some time.  The film was Darby O’Gill and the Little People.  The innocuous title belied multiple appearances of a very scary creature in the film called a “banshee.”

I lived with my parents and younger sister in a small, two-bedroom home.  The living room, kitchen, bathroom and both bedrooms all opened into a small hallway.  Mounted on the wall of that hallway was a single light fixture. The lamp’s stem stuck out of its wall plate in a downward, then upward curve to an upright socket fitted with a round, squaty, frosted glass chimney shade.  When it was dark in the hallway, you’d flip the switch turning on the lamp which projected, upward and around, an eerie glow that in itself was scary enough. But it also cast a shadow on the wall behind and below which, in the active mind if an eight year old, resembled a dark, flowing cape or robe.  I used to run through the hall from one room to another, especially at night, averting my eyes from that lamp as much as possible.

Witnessing a banshee on the big screen in a darkened theater, then coming 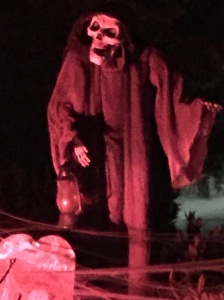 home to an already tenuous hallway situation with terrifying light and shadow, inevitably led to regular nightmares.  They were nightmares from which I’d awaken with a start, heart beating in my throat.  In each nightmare, the hallway lamp would come to life as the banshee, howling and reciting something that I’ve mostly forgotten, but which always ended with the phrase, “…all your ages and wages.”  I have no clue what it meant, but it scared the crap out me.

And that’s what I think about every Halloween.  What’s your nightmare?

Here’s a movie clip (click on it and see for yourself):  Darby O’Gill and the Banshee