I’m fortunate to live near a listener-supported, community radio station known as Asheville FM.  I didn’t know much about them until one day while walking by there I noticed a canopy over a table set up in front of the small, nondescript corner building where some friendly folks invited me over to chat.  They told me about the organization, an entirely volunteer driven Friends of Community Radio station, save for one paid manager position.  They showed me a program schedule and pointed out the eclectic shows that are hosted entirely by volunteers.  Of course, it was also their spring fund drive and they asked if I might be interested in contributing, either fiscally or physically, to their efforts.

Anxious to jump on board, I walked home to get my checkbook and then, after donating enough money to snag a snazzy Asheville FM t-shirt, stood behind the table, meeting more of the volunteers, learning more about the station and its programs, and urging other passers-by to stop, listen and learn about this community-powered radio station located in their backyard. 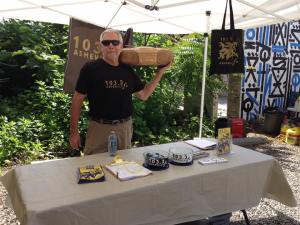 Days later I found myself standing under the canopy, behind the Asheville FM table at another community event, talking with  folks about the station, its programs and its opportunities to serve the Asheville listening audience.  I listened to the programs broadcast on-air and streamed over the Internet.  Upon attending a DJ orientation session, I began the path toward earning a chance to host my own radio program, “shadowing” other program hosts and even appearing as a guest on a couple of shows, bringing music from my own collection to play and discuss on the air.

Twice as a guest (and “shadow”) on the Thursday morning show, Riffin’, hosted by Vance and assisted by Rick, both with their vast record collections of 60s and 70s music, I shared some similar music from the Midwest, discussing the bands and songs we heard growing up.  We played music by the Robbs, the Cryan Shames, the Buckinghams, the New Colony Six, the Mob, the Flock, the Ides of March and other Midwest groups.  What a gas!

One Monday evening found me shadowing on a program aptly named Uncorrected Personality Traits with hosts Jaybird and Juliet.  It was a deliciously juicy treat, playing what can only be described as a truly eclectic cacophony of ear candy, some sweet, some sour, but all highly digestible with little or no antacid required.  Two other program hosts, Sarah and Erik, graciously opened their programs to me for shadowing, and I was able to watch, learn and earn more air time with them.

The week of October 28 – November 3 is the Asheville FM “Fall Fund Drive.”  You’ll find me volunteering again at that table under a canopy set up in front of the station.  I was also invited to be a “pitch partner” for an hour with Professor JD during his prog rock show, Closer to the Edge, on Thursday afternoon of the fund drive.  I’m bringing some classic prog music from the late 60s to mid 70s, including King Crimson, Moody Blues, Touch, Renaissance and Pink Floyd among others.  Perhaps we’ll even share some stories along the way as we try to raise money for the station.

So when you get a chance, turn on, tune in and turn up your radio to Asheville FM (WSFM-LP 103.3) or click on AshevilleFM.org and give some real community-powered radio a listen.  Check out the schedule.  There’s sure to be something to tickle your eardrums.  And one of these days, I hope to be doing the tickling. 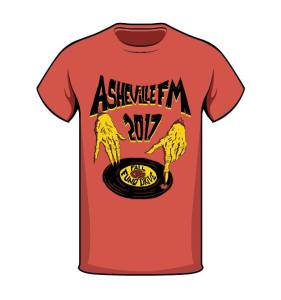 One thought on “Chasing a DJ Diploma”