Until recently, I was receiving weekly emails from a fellow blogger who also writes about music. He’s more prolific than I, writing weekly posts, waxing nostalgic or offering insight into music from his past, not unlike other writers I follow.  And like the others, I know how to access his blog so I didn’t need weekly reminders.  Determined to cut back on the number of emails infiltrating my inbox, I requested my name be removed from his list. I kept the message brief, figuring a long explanation wasn’t necessary.

Judging from his reply, he was deeply offended by my innocent appeal and wasted no time informing me, stating “(I’ll) Spare you the trouble of having to not read something.”  At first I thought he was joking, but he continued with a rather harsh criticism of my blog.  He wrote, “I haven’t read your blog since that head-up-the-butt ‘Songs of the Resistance’ post back in January. That would have been hard to top — or slide under the lowered bar, as it were — but I wasn’t interested in finding out whether you could, or did.”

I realize it’s not great literature, but “head-up-the-butt?”  Ouch!  Guess I touched a nerve.  Or struck a chord, so to speak.  His reply also included three unattributed quotations, all sharing the same general theme about “savage mobs” and “reverence for the law.”  At the end he finally alluded to the source of his quotations by posing a question, “How could Abe Lincoln have foreseen the #Resistance, Antifa, Black Lives Matters (sic), the anti-free speech mobs on campus, etc.”

Clearly, he appreciates neither the resistance nor my song list.  It brought to mind one of his previous blog entries in which he described a classic Crosby, Stills, Nash & Young album as containing “smug hippie anthems.”

Rather than take umbrage at them, his remarks piqued my interest.  The words of respected historical figures are posted ad nauseam among social media groups and become rallying cries for various causes.  Some research revealed those three quotations my fellow blogger shared with me were excerpted from one speech Abraham Lincoln delivered on January 27, 1838 entitled The Perpetuation of Our Political Institutions: Address Before the Young Men’s Lyceum of Springfield, Illinois.  It’s been studied and debated by Lincoln scholars for years.  So was it an indictment of future Resistance, Antifa, Black Lives Matter, or anti-free speech movements on campus?  I don’t believe it was, and here’s why.

William Herndon, who became Lincoln’s law partner in 1844, had this to say about the Lyceum speech:  “The speech was brought out by the burning in St. Louis a few weeks before, by a mob, of a negro. Lincoln took this incident as a sort of text for his remarks…”

Reading the entire speech, it becomes apparent that Lincoln, upset by the lynching of a black man in St. Louis and similar lynchings of black men and their white sympathizers in other states, was condemning those mob actions specifically.  If I were to respond to my detractor, I’d point out that black lives seem to have most certainly mattered to Abe.  I’d also reframe his question and pose it back to him:  How could Abe Lincoln have foreseen the Ku Klux Klan, Nazism, the white supremacy movement, a president who is complicit, etc.?

Instead, I’ll resist the temptation to respond directly and simply dedicate the rest of this post, entitled “Smug hippie anthems” (Pièces de résistance, partie deux), to my fellow blogger and critic.  Having already written too many words, I’ll keep it brief.

Some time back, I was handed a page torn from an issue of Vanity Fair magazine.  It was a list of “favorite protest songs” by celebrities Lin-Manuel Miranda, Q-Tip, Mavis Staples, Tegan & Sara, John Mellencamp and Brittany Howard.  Even if you aren’t familiar with some of these artists, you might appreciate the song titles they shared.  I invite you to enjoy the following link to a list of their selections on the Vanity Fair website, each of which you can find on YouTube, Spotify, iTunes or other purveyor of “smug hippie anthems.”  To see the list, click on this title: Lin-Manuel Miranda’s favorite protest songs. 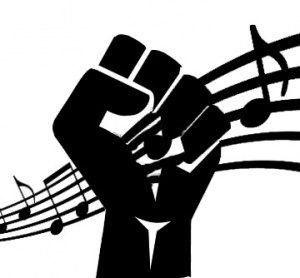